The last few months have been super-busy, with the London FILM4 FrightFest soundtrack in August, and 4 different short films since then.
The first of which is a beautifully stylish contemporary vampire piece, called “Endless” - and is produced and directed by award winning TV director Matt Bloom.
Endless is a completely different kind of short film.

It was shot from start to finish on a Phantom Slow Motion camera, and the results are quite simply stunning.
Often shooting at speeds of 400, 500 or 800 frames per second, - the film plays like an involving and intricate Alfred Hitchcock set piece, with stunning levels of suspense and dramatic energy in just 8 short minutes which absolutely draws you into the film from the outset.
Matt originally described the idea to me as ‘a whole horror film in car-crash slow motion, with endless moments of terror’ – so I was really eager to see how he had managed to accomplish such an alternative idea.

I have always been a huge Brian De Palma fan, and I don’t think anybody has really come close to the levels of drama and energy in some of his beautiful signature slow motion set pieces from films like Dressed To Kill, Blow Out and Obsession, - so I was really excited when I saw the rough cut of the film, because it reminded me of some of those very special sequences from some of my favorite films.

There is no dialogue at all, so from a musical perspective, it was a completely unique challenge, and a fantastic learning experience too.
Visually, the film is very strong, – so it became evident early on that it would be so easy to overcook the score, and we didn’t want to resort to obvious cheap (modern) gags like having a huge, ear-splitting “bang” on every single cut.
One of the most difficult things from my perspective was to blend subtle emotional sections with high drama, tension and dread - in such a short space of time, and without any dialogue to misdirect the proceedings. 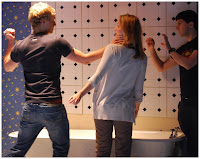 Before work had started on the score, we swapped a stack of eclectic music back and forth online, and Matt had some strong ideas and musical references up front, which really helped in establishing a tone.
However, it was really interesting to see Endless take on a musical personality all of it’s own throughout the process, and I think the final score was quite different than either of us expected. 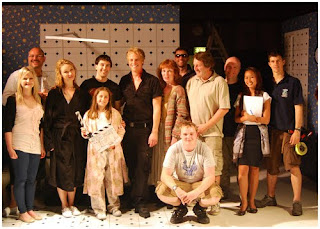 Endless, directed by Matt Bloom, and staring Chris Geere (Band Of Brothers, Casualty, The Bill) is coming in Autumn 2010
Posted by Dave@Two13.com at 11:48 1 comment: