Music for the London FILM4 FrightFest 2009 - some of the pieces

Hello folks, and thanks for the emails & messages regarding the playlist of tunes this time around.
For interested parties, I've put together a few sections of the pieces for your perusal and perlustration - which are located in the little MP3 player right here:

Kicking things off this year is the full version of the FrightFest Podcast theme (without chattery teeth FX) - a piece which some of you should be familiar with if you follow regular inter-web transmissions from FF headquarters, - but there's also a pretty eclectic range of stuff from the weird & bizarre (Don't Wake Up & Beneath The Keep) to keys vs 6-string duals (Casting The Runes)
Something I wasn't aware of until recently was the existence of mythological bird / bat like creatures called 'gappes' in the labyrinthine maze of the London underground, and I had to consult the books for some verification of the details.
Taken from the London Underground Guide: Approaching trains sometimes disturb the large Gappe bats that roost in the tunnels. The Gappes were smuggled into London in the early 19th century by French saboteurs and have proved impossible to exterminate. The announcement "Mind the Gappe!" is a signal that you should grab your hair and look towards the ceiling. Very few people have ever been killed by Gappes though, and they are considered only a minor drawback to an otherwise excellent means of transportation." 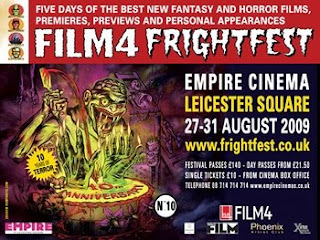 So - forewarned is forearmed. Most people will be traveling to FrightFest X via the tube at some point, so I thought I'd pay some respect to these creatures, and feature them in one of the pieces.
There are a couple of other underground legends on the playlist, but I'll save those for next time.
Until the next blog, take care, stay safe & mind the gappe!!
Posted by Dave@Two13.com at 07:53 1 comment:

Music for the London FILM4 FrightFest 2009

It's that time of year again, and the 10th anniversary of the London FILM4 FrightFest is almost upon us.
From Thursday 27th - Monday 31st August 2009 - the premiere festival of fright will be at it's new home in the Empire Cinema, Leicester Square - and with over 40 movie screenings, amazing guest appearances from John Landis, cast & crew of An American Werewolf In London, Neil Marshall, Chris Smith, David Hess - and many more, there's sure to be something for every discerning horror aficionado.
For the fourth year running I'll be composing a playlist of new material which will be aired in the theater between the movies throughout five grueling days of fear, fright, mayhem, putrefaction and petrification!
There's lots of musical experimental shenanigans going on so far, and I thought I'd dig a little bit further down to the roots this time.
The pace is up a little more than usual, and there are more stringed instruments, more greasy organs, thicker bass-lines, more layers of moogs and synthesizers, buckets of sequencing, - but still plenty of spook and atmosphere to keep things eerie, dark and contextual, - with the occasional voiceover here and there, and a hint of 60s vinyl too!
The 4 pieces completed at the time of writing are pretty diverse, with another 9 to go between now & the end of August, and the tracks will range from strange, cryptic, dark and moody, to all out retro rock fusion, and will hopefully reflect the good vibes and energy of the FrightFest.

The intro track is quite thematic. I wanted to start the CD with a live dynamic this time around, so it was time to break out a variety of guitars - and make a very conscious effort to strike the right balance between electric and acoustic to really give it a fuller and more authentic 70s movie edge. Of course, a piece like that wouldn't be complete without a manic solo trade-off between strings and keys to grease the tracks, and keep things rocking and rolling along.

I definitely wanted less synthesis and more authentic natural sounds on this collection, so I've been investing some quality time up front into recording a miscellany of stuff I found in the attic with a Rode NT-4 stereo mic and a couple of little Behringer C-2 condensers - and then twisting torturing & squeezing the results into weird sounds.
There's nothing more satisfying than hitting inanimate objects with something, recording the results and bingo! An interesting new sound is born.
So far I've recorded old broken instruments, fire, kitchen utensils, weather, cats etc etc - and I'm sure there'll be plenty more before it's finished.
So, if anybody's listening - the candles are burning, the valves are smoking and the speakers might catch fire at any time.
Catch you next week for further info!
Boring gear list:
Mics: Rode NT-4 stereo / Behringer C-2 (pair) 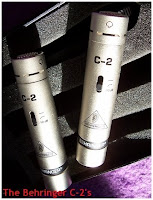 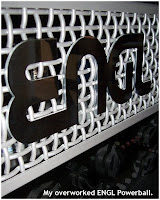 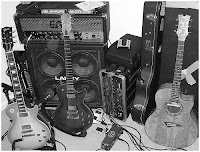