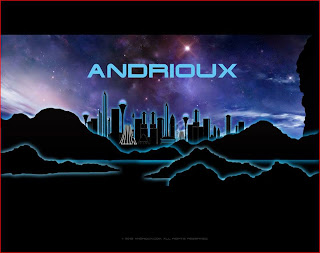 I always count myself lucky that I grew up as a child of the 80's.

I suppose if anybody is friends with me on Facebook or Twitter, - then they would know that I love the 80's, and that I grew up on electronic movie scores.
I loved the futuristic design, and colour and illustration, and the movies and music of the time were thoroughly unique.

For the last few years, I've either been touring - playing guitar for somebody else, or putting together music for films that ultimately belong to somebody else, so I haven't really written any new music for a while.


I had previously (2006 - 2010) written 5 albums, which were mostly theatrical music played between the movies for FILM4 FrightFest, - London's massive 5-day annual horror movie festival, which is held in Leicester Square each August.

The material was mainly ambient and atmospheric sound design incorporated into four or five minute song type formats - and it was all very 'horror' themed, which was fun to do, but also has creative limitations.

All of the tours I have played over the last few years have been as guitarist for popular rock artists, and of course the sets were a catalogue of their biggest and most popular tunes.


At some point during a tour last year, I made a decision that this year I wanted to spend some time developing some of my own music, and just enjoy writing again for the simple pleasure of writing.
and maybe put together a short EP.

I've had the idea for the last few years to do a more electronic conceptual type thing, but talked myself out of it every time - for all the right reasons.

Anyway, here we are.
I decided to just get on with some writing, and see what happened.

I spoke to my friend Nola about creating some new visuals - and very soon, she created the most awesome fantasy, sci-fi pieces of artwork which really helped me to start getting a vibe down.

I really wanted the music to be exclusively electronic and synth driven, because it immediately transports me back to nostalgic times and the discovery of a whole world of new movies.

It still (hopefully) has cinematic themes and vibes, but I've made a conscious decision to avoid any aggressive themes, because I've done lots of it over the last few years.
So . . new music, new look - and a bit of a change of identity.